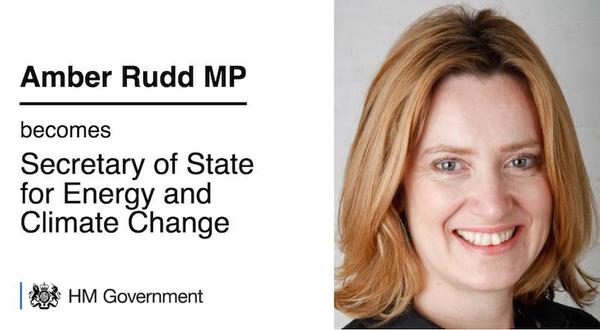 The British government announced its successor to Ed Davey as energy secretary on Monday, and it has been greeted with optimism among renewable energy interests.

Amber Rudd, a former financial journalist and investment banker, was appointed the UK‘s Secretary of State for Energy and Climate Change by Prime Minister David Cameron.
Ms Rudd was parliamentary under-secretary at the Department of Energy and Climate Change prior to last week’s general election. She was Chancellor of the Exchequer George Osborne’s private secretary from 2012 to 2013.

John Alker, Director of Policy at the UK Green Building Council welcomed the appointment, referring to Rudd as ‘a minister that understand the business case for low and carbon energy efficiency and some welcome continuity.’

Leonie Greene, Head of External Affairs at the Solar Trade Association  had earlier tweeted a positive reaction to the impending appointment, tweeting, “So, if @TheSunNewspaper is right, it looks likely @AmberRuddhr will be DECC SoS. Reassuring for Gov approach if so… #fingerscrossed.”

Chairman of the STA Paul Barwell added to this, saying, “We hope that Amber Rudd’s experience in finance, her previous experience in the Treasury and her real understanding of the needs of new and growing businesses will mean that she recognises the value that the UK’s thousands of small and medium sized solar companies can bring.”

Meanwhile the UK’s Renewable Energy Association was similarly upbeat – referring to it as ‘good news – Amber Rudd has done huge amounts of work for #climate.”