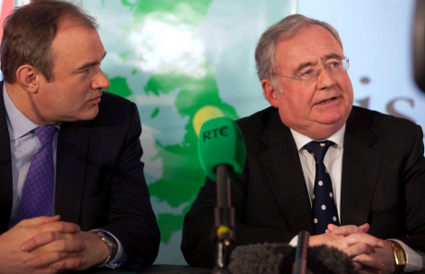 The Irish leader Enda Kenny and UK prime minister David Cameron met on Wednesday to discuss a renewable power trading pact, which appears to have been shelved following a breakdown in talks between their respective energy ministers.

The plan had involved connecting up to 8 GW of Irish wind power to the UK energy grid by 2020 to help the former meet its EU renewable power obligations, but talks between energy ministers, Ed Davey and Pat Rabbitte (pictured) have stalled.

Two companies, Mainstream Renewable Power and Element Power, were leading efforts to erect 1,000 turbines across central reland to connect to the British grid.

However, there are legal and regulatory barriers to be thrashed out and Irish energy minister Pat Rabbitte said last week the deal was unlikely to go ahead in time.

“At this stage I am doubtful as to whether an inter-governmental agreement can be concluded with the British government,” he told the Irish Independent. “I met with Ed Davey in Brussels on Tuesday and, following that meeting, I am confirmed in my view.”

“In terms of the timelines dictated both by European policy and the exigencies imposed on developers ” in other words between now and 2020 ” I can’t now see an export project as envisaged.”

Bloomberg reports that the delay in the deal may slow billions of euros of investment in wind farms in Ireland, where Mainstream Renewable Power Ltd., Bord Na Mona Plc and Element Power plan to develop the projects provided they can sell electricity to the U.K. and mainland Europe.

Element is planning an EUR8bn ($11bn) 3 GW onshore wind project called Greenwire, which it intended to connect to the U.K. grid by 2018. Meanwhile Mainstream’s planned 5 GW Energy Bridge project, and Bord Na Mona’s 2 GW of plans would bring spending to more than EUR26bn.

A negotiator cited in the Irish Times blamed UK coalition tensions for undermining the project. The two sides signed a memorandum of understanding to work together on renewable energy trading in January 2013, but the negotiator accused the Conservatives of being more interested in North Sea oil and fracking.

Kenneth Matthews, chief executive of the Irish Wind Energy Association, said it was “an opportunity delayed rather than an opportunity lost”.