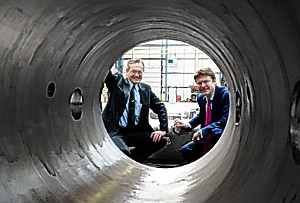 The UK city of Stoke-on-Trent has put together a business plan for a à‚£52 million (US$85 million) district heating system fuelled by geothermal energy.

A layer of hot rocks that sits two miles underneath the city has been shown to heat water to up to 105à‚°C. One theory about why the rocks are hot includes speculation that there was an active volcano at the location 350 million years ago. à‚

The city council now plans to build an 11 km pipe network to bring the heat to public buildings and eventually to households, with the help of a à‚£19.75 million government grant. à‚

According to documentation on a proposed ‘City Deal’ with the government, the system could produce up to 45 GWh per year.

Under the business plan, à‚£28.25 million in funding is expected to come from the private sector and à‚£3.4 million from the city council. The council will build the pipe network, while private firms will construct the plant and market the heat. The council is set to present the business plan to the government in early 2015. à‚

The project represents only the second geothermal district heating network in the UK.