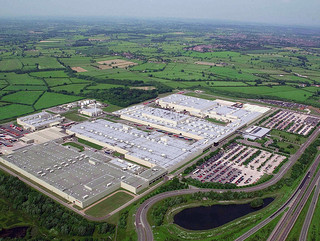 A large solar photovoltaic installation has been commissioned at Toyota’s Deeside plant in the UK’s North Wales.

The plant, which manufactures engines for a number of car models, now features some 13,000 roof-mounted solar modules which supply some 10% of the installation’s electricity demand.

Commissioned as a multi-million-pound project delivered by British Gas, construction took three months and the facility can generate up to 3475 MWh annually, cutting carbon dioxide emissions from the plant by some 1800 tonnes per year.

Toyota had already installed one of Britain’s largest solar arrays in 2011 at its Burnaston factory (pictured) in Derbyshire.

Jim Crosbie, Toyota’s Deeside Plant Director, said: ‘The significant investment we have made in the new solar array marks a major advance for Deeside and Toyota Manufacturing UK in our mission to minimise the environmental impact of our operations, cutting carbon emissions and powering our production in a way that’s cleaner and more environmentally efficient.’

He continued: ‘The solar array won’t just reduce our carbon footprint, it will demonstrate to the wider Welsh and UK manufacturing sector the tangible benefits renewable energy can deliver.’