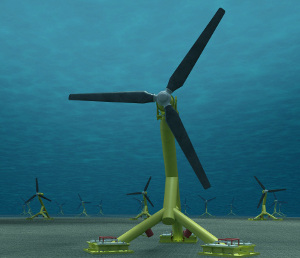 Tidal power is set for growth in both the near and medium terms, according to new analysis.

A new report from Frost & Sullivan, Tidal Energy: Current Status and Future Outlook, noted that the tidal power plants that are currently operational worldwide are likely to spur growth in the near term. “The success of smaller demonstration plants will propel the immediate adoption of tidal stream and tidal barrage technologies,” said F&S Technical Insights Research Analyst Lekshmy Ravi.

In addition, the report found that new, experimental concepts such as dynamic tidal power, which enable power production even in low-tide regions, could potentially disrupt existing technologies and propel tidal power to the forefront of various nations’ energy mixes. While dynamic tidal power has not yet been tested, the report noted that it has generated interest globally and “has great potential if successful”.

In the longer term, F&S believes tidal power could play a part in hybrid power systems. “The deployment of hybrid energy systems consisting of a combination of tidal and offshore wind energy seems probable in the long term,” said Ravi.

However, harsh marine conditions, low capacity factor and high costs were identified as drawbacks of the technology. Increased R&D efforts around material strength, performance, maintenance and the lifespan of tidal converters are needed, the report said.

For technology advancements to speed up, the establishment of R&D centres and funding institutions will be crucial, F&S said. It pointed to Canada’s Fundy Ocean Research Centre for Energy (FORCE) as the main driver for the progress of in-stream tidal energy in the country.

“Stakeholders must build a coordinated, multi-disciplinary strategy for tidal power to continue creating ripples in the renewable energy sector,” Ravi said. “A concerted approach by regulatory agencies, technology developers, funding bodies and infrastructure firms will open the floodgates of development and give rise to tidal energy solutions with significant industrial and societal value.”

The report identified the UK as the market leader in the development of tidal energy technologies due to a combination of its tidal pattern, which is ideal for the technology, and supportive policy framework. Canada, China and South Korea are seen to be progressing steadily in developing the technology, while the US is notable for innovation.