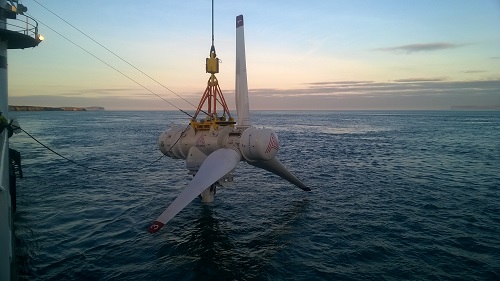 In a session called ‘Emerging Renewable Energy Technologies’ at POWERGEN Europe today, three different tidal energy solution providers delivered the message that tidal energy has a place in the energy mix of tomorrow.

Drew Braxland, Director with Atlantis Turbines and Engineering Services gave the audience a glimpse at the Raz Blanchard pilot array in Normandy, France. It’s a 4-turbine project with installed capacity of 1.5 MW. The four turbines are each connected to one hub and connected to the grid by a single cable.

Blaxland emphasized that servicing the turbines, despite that fact that they are underwater, is not an issue. He said his company has proved that it can connect a turbine to the grid in 30 minutes and when performing O&M, the turbine can be lifted from the sea, serviced on the deck of a boat and returned to the ocean in under 24 hours.

Blaxland said the market potential for tidal energy is near 100 GW.

Chris Milne, CFO of Orbital Marine, then presented his company’s solution for floating tidal energy. He began by saying that the tidal energy industry had overpromised and underdelivered in the past and that he and his fellow presenters were here to say that tidal energy has improved.

“We are doing our bit now to prove that this is commercial technology that is deployable at scale,” he said.

Milne said that the installed cost of tidal energy from Orbital’s solution is in line with that of offshore wind and that O&M for the device, since it is floating, is in line with that of onshore wind. Special boats are not required to maintain the device as any service boat can be commissioned to bring technicians to the site, who then walk right onto it and situate themselves within it to work on it.