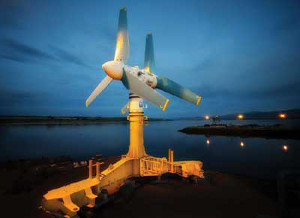 Aà‚ tidal power project in Scotland is to share grid access with a wind farm after an agreement was signed this week.

Ocean energy firm Atlantis Resources’ 398 MW MeyGen project in the Pentland Firth was connected to the 33 kV Ness of Quoys distribution network in June and is expected to be fully operational later this year. The network will now be shared with a four-turbine wind farm, currently under development by Scottish firm Lockend Wind Energy Ltd, which will access the grid at times when the tidal array’s output is low.

The deal covers a part of the local network which is severely constrained, with no new connections possible before a planned infrastructure upgrade is completed in the next few years. The grid-sharing arrangement will enable Scotland to maximize the region’s renewable power output in the near term.

Atlantis Resources said the agreement was a first for the UK’s renewables sector and was possible due to the predictable nature of tidal power generation. à‚

The firm’s CEO Tim Cornelius said the deal “show[s] that the predictability of generation from the tides can also benefit other forms of renewable energy by allowing those generators to accurately forecast and access spare grid capacity.

“Sharing transmission assets in this way and capitalizing on the predictability of tidal power will ensure that, in the long term, our energy needs are better served whilst also maximizing access to a constrained network in the immediate future,” he added.