The recommendations have been released following realisation that policies enacted by many G20 countries are significantly off course.

Between 2015 and 2019, G20 countries issued more than $3.3 trillion in funding for coal, oil, gas, and fossil-fuel power, which is directly opposite of what needs to be done to achieve environmental sustainability by keeping temperature rises well below 1.5 degrees Celcius.

With G20 countries accounting for 75% of global emissions, increased climate action from the governments will have a critical role in mitigating climate change.

Have you read?
Wind sector CEOs call on G20 to get real about renewables
No pathway to 2050 net-zero goal without G20 leadership ” UN
Wind, solar and storage provide greatest potential to reach Fit for 55

The three areas highlighted in the Climate Policy Factbook include:

Despite setting ambitious goals to transition away from fossil fuels, G20 countries continue to invest in high-carbon emission power generation projects. The amount directed by the countries in fossil fuels is equivalent to building up to 4,232GW of clean energy capacity or green electricity 3.5 times the size of the US power grid.

If directed to renewables projects, the investment would have played a significant role in amplifying the decarbonisation of the energy sector. 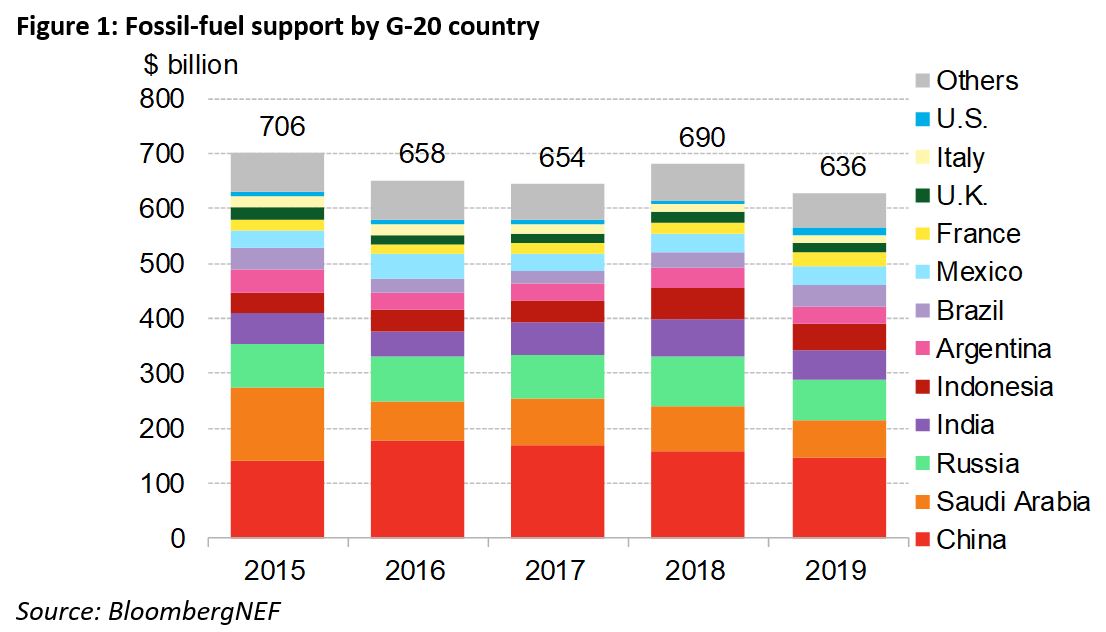 Between 2015 and 2019, eight G20 countries including the US, Canada, and Australia have massively increased their support for fossil fuels whilst eight others including Italy, Germany, South Africa and Germany took actions to reduce their use of fossil fuels.

This resulted in a 10% reduction in fossil fuel funding during the period. However, BNEF says the decrease is insufficient and needs to be massive and by all member states for the transition to net-zero to become a reality.

2. Putting a price on emissions

Emission pricing mechanisms must be put in place to hold polluters accountable for the cost of their actions. To date, only twelve G-20 countries have nationwide prices on greenhouse gas emissions either by a carbon tax or market-based mechanisms.

Enforcing globally accepted climate-risk disclosure frameworks, like that of the Task Force on Climate-related Financial Disclosures (TCFD), is critical to ensuring climate risks and opportunities are assessed accurately, so financial institutions can consider and price the impact of climate externalities into their credit risk and valuation models.

Michael R. Bloomberg, founder of Bloomberg LP and Bloomberg Philanthropies and the UN Secretary-General’s Special Envoy on Climate Ambition and Solutions, said: “Winning the fight against climate change requires urgent and bold action across every industry, and we need governments to lead the way.

“Our hope is that G-20 members take this report to heart, use its recommendations to hit their Paris Agreement targets, and show the world the health and economic benefits of building a resilient, sustainable global economy.”