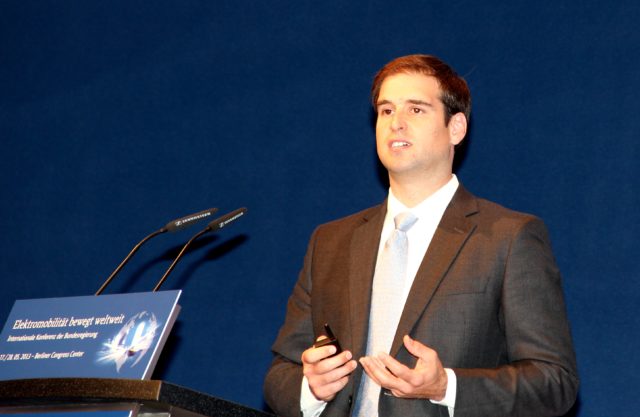 A top executive at Tesla has been outlining a vision for electricity storage, which is set to have a momentous impact on power generation.

JB Straubel, chief technical officer at the company, says solar power will be the main beneficiary once the cost of lithium-ion batteries continues to decrease.
Speaking in San Francisco on Monday, Straubel described a future in which all vehicles (other than planes and rockets) are powered by batteries, and new electricity systems are built with solar panels combined with batteries.

While the cost of lithium-ion batteries has dropped in recent years, Straubel said that the price will continue to decline dramatically — and he thinks it will happen much more quickly than most people think. These batteries are just at the beginning, or at “the cliff,” of even lower prices, said Straubel.

According to the company co-founder, when the combination of batteries and solar panels become cheap enough to provide electricity for less than the cost of fossil fuel power, solar energy will become the low cost choice.

“Once we get to that there is no going back. That’s the tipping point that’s going to happen, I am quite certain, over the next 10 years,” said Straubel.

In April, after close to five years of research and testing, Tesla launched a new division focused on building batteries for the power grid and buildings, which the company calls “Tesla Energy.”