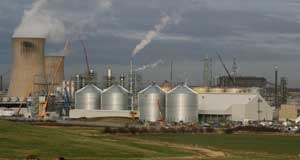 The Ensus biofuel power plant in Teeside, northeast England has had to be mothballed as global oil price decline and bioethanol price fall continues to impact.

Mannheim, Germany-based CropEnergies, the Ensus plant’s owners said that 100 staff would be kept on in the event of a turnaround, and told the FT that the pound’s strengthening against the euro and a lengthy wait for an important EU biofuel policy decision had contributed to the decision to suspend operations.

“I think the most important factor is the EU decision,” said Marten Keil, chief operating officer of CropEnergies, a subsidiary of German sugar producer, Südzucker.

Mr Keil said the industry had been waiting to see how Brussels would limit the amount of food crop-based biofuels that can count towards the bloc’s aim of deriving at least 10 per cent of its transport fuels from renewable sources by 2020.

He added that Ensus, which uses lower grade animal feed wheat for its bioethanol and also produces dried protein livestock food, was expecting to see a final EU decision in April and would take this into account when deciding when to reopen its Teesside plant.

The decision is the latest temporary shutdown at Ensus, which has closed in the past because of faltering European demand for bioethanol.

A sharp fall in biofuel prices, which has mirrored the decline in oil prices, has added to the industry’s woes.