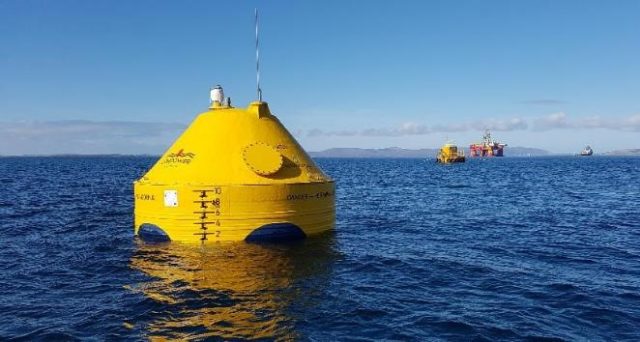 A wave energy technology has completed an 18-month test programme and has now been verified by the European Marine Energy Centre.

The wave energy converter was developed by Swedish clean power company CorPower. It was tested both onshore and then in sea conditions to examine its resilience to storms and also its power generation ability – trials which it has now passed.

“We’re delighted with the success of the project,” said Elaine Buck, Technical Director at the European Marine Energy Centre in Scotland. She added the wave energy converter had been “put through a rigorous test programme, beginning with onshore power take-off tests in Sweden using a bespoke hardware-in-the-loop test rig, and culminating with ocean testing at EMEC’s scale test site at Scapa Flow in Orkney.”

The technology is funded by Wave Energy Scotland and also supported by the Swedish Energy Agency and EU innovation organization InnoEnergy. Wave Energy Scotland managing director Tim Hurst said the success of the CorPower device “takes us a step closer to demonstrating cost wave energy technology can be cost competitive with other forms of low carbon generation. We are keen to see this technology demonstrated at full scale.”

Marit Marsh Strömberg, programme manager at the Swedish Energy Agency, said that wave energy “is a large untapped source of renewable electricity, with a harsh environment that brings many technical challenges. The successful completion of the demonstration project is a key step in bringing Corpower’s technology to commercial maturity.”

She added that the Swedish Energy Agency would be funding Corpower’s next stage of the project, which will involve “a single full-scale device, followed by an array of another three devices.”

And InnoEnergy chief executive Diego Pavia said CorPower was “one of the great InnoEnergy success stories, which has gone from strength to strength since our first investment in the company in 2012. Since then it has established itself as one of the leading companies in wave energy, which is proven once again with these breakthrough results.”

The latest renewable energy developments will be discussed in detail at POWERGEN International in Orlando in December. Click here for details.