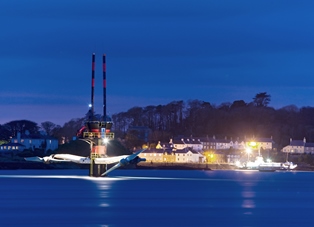 Siemens has stopped work on what would have been the first tidal array in Wales.

Siemens gave no reason for pulling the plug on the £70m Skerries array, which it was working on with Marine Current Turbines, a company it bought in 2012.

Five tidal generators would have been sited in waters up to 130ft deep half a mile from Holyhead.

In a statement, Siemens said: “Following discussion with our partners we have decided to suspend our work on the Skerries Tidal Array Project in Anglesey.

“We will continue to review our strategy for deployment. Our discussions with suppliers and other key stakeholders are ongoing on different opportunities.

“We continue to believe that tidal energy will play an important future role in delivering the UK’s low carbon economy and creating long term sustainable jobs.”

The government withdrew a £10m grant that MCT had been awarded through the Marine Energy Array Demonstrator fund in June, after struggles to find match funding pushed the project beyond the 2016 deadline to produce power.