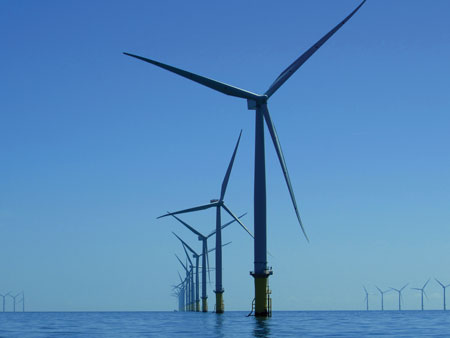 Activity in the UK offshore windfarm sector reached a record high in 2016, as the total construction value for projects reached à‚£4.1bn, increasing from à‚£2.45bn in 2015.

According to the firm’s latest data, offshore windfarms alone accounted for 42 per cent of UK construction contract value in the utilities and power sector and 21 per cent of the entire infrastructure sector.

And the company says this trend is likely to continue, with the pipeline for future offshore wind developments “looking healthy” with à‚£23.2bn-worth of construction contract value in the planning stage.

Barbour ABI found that three major projects made a significant difference to the increase in construction contract value for offshore wind farms in 2016 ” the Beatrice, Galloper and East Anglia offshore wind farm, which together are worth a combined à‚£3bn and which once built will produce over 1600 MW of electricity per hour.

Michael Dall, lead economist at Barbour ABI, said: “Back in 2013, offshore windfarms accounted for only 7.5 per cent of the annual construction value for the utilities and power sector, which increased to 42 per cent in 2016 on the back of significant investment in this type of project.

“With reports showing that the cost of producing electricity in this way have fallen significantly, the increase in construction value makes sense.”

Dall added that Barbour ABI has also “seen a large uptake in the planning pipeline for future offshore windfarms, suggesting this burgeoning sector will continue to expand in 2017 and beyond”.