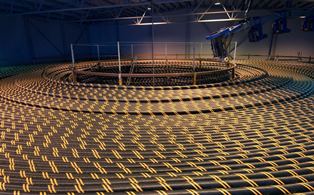 Italian cable company Prysmian is hailing as a “milestone” the verification of its higher voltage cable system technology for offshore wind inter-array networks.

The Milan-headquartered group says that testing of its 66 kV cable system has been successfully completed in accordance with CIGRE and IEC test protocols, as part of the Carbon Trust’s Offshore Wind Accelerator (OWA) programme.

The Carbon Trust is an independent UK company set up to drive a move to a low-carbon economy, and the OWA is its collaborative RD&D programme, involving nine offshore wind developers and supported by the UK Department of Energy and Climate Change and the Scottish government.

Raul Gil, Prysmian PowerLink chief operating officer, said the new qualification “is a further advance along our path towards the development of innovative, sustainable and cost effective cable solutions for the offshore renewable power industry“.

He added that Prysmian “is both prepared and fully geared to support the global offshore wind market, such as the UK’s Round 3 project opportunities”.

The OWA has identified higher voltage electrical arrays as an area for development which could deliver significant benefits to the design of future offshore wind farms.

Jan Matthiesen, director of innovation at the Carbon Trust, said: “Moving to 66 kV intra-array networks offers a great opportunity to cut costs.à‚  However, through the Offshore Wind Accelerator we identified that there was limited investment going into the development of 66 kV cables that could be cost competitive to 33 kV intra array cable.

“This is a key requirement if we are to move to higher voltage arrays. This latest announcement proves the effectiveness of the OWA in bringing cable manufacturers and offshore wind developers together to accelerate development, manufacture and certify important new cable solutions for 66 kV.”