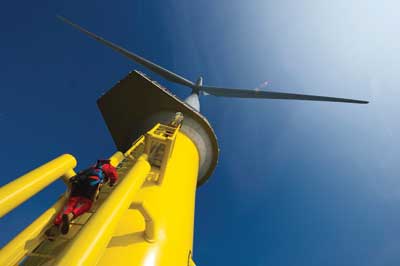 Last year was “exceptional” for the wind business of UAE-headquartered company Masdar, according to its clean energy director Bader Al Lamki.

Speaking at this week’s World Future Energy Summit in Abu Dhabi, he said the highlight of 2013 was the opening of London Array (pictured), the biggest offshore wind farm in the world, which went online last summer off the east coa

Masdar, alongside E.ON and Dong Energy, is developer of the 175-turbine, 630 MW site. Al Lamki said that on the back of large projects such as London Array to smaller schemes like one in the Seychelles, he said Masdar was looking to 2014 with optimism. “Not blind optimism but founded optimism: wind has shown its resilience in terms of being able to compete with other forms of energy.”

He said there was much for the sector to be positive about going into the new year, highlighting Jordan’s first wind park, regulatory stability in the UK, a growing sector in France and the “huge market” in Morocco, Egypt and Saudi Arabia.

His fellow panellists were more cautious on wind’s prospects in 2014, although all agreed on one country where growth was sure to come: “South Africa is the most promising market,” said Carmen Becerril, chief international officer at Spanish wind power company Acciona.

She said Acciona was looking to Africa for fresh business as Europe “will be in a very flat position for 2014”.

Markus Tacke, chief executive of Siemens’ wind power division, agreed that 2014 “will be a challenging year”, predicting that the prospects in offshore wind were much better than those onshore.

He said onshore was a “flat market”, with the Middle East and North Africa remaining the region “that we have hope in”.

However all the panellists agreed that the financing of wind projects was becoming easier as investors were now looking favourably at the technology.

Alexis de Beaumont, general manager for the Middle East and Africa for Alstom, said there was a “new dynamic” in funding. “Money is coming from new sources that are expecting returns that are not so high and perhaps more predictable. It is a significant change to see institutional investors coming into our industry, and it is a very welcome trend.”