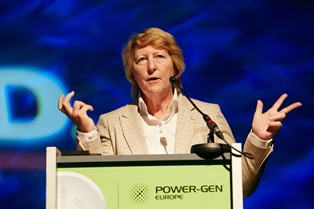 The director of energy at the European Commission has said that Europe is “extremely at risk and exposed” by its huge reliance on oil and gas imports.

Speaking on the opening day of POWER-GEN Europe in Amsterdam, Marie Donnelly, said that the knock-on effects of events such as Fukushima, the rise of shale gas in the US and uncertainty surrounding Russian gas highlighted how much Europe was affected by energy issues outside its borders.

Which she said made it all the more important for Europe to act in an integrated, collaborative way. “We can’t continue to operate with 28 separate boxes in the EU.”

She also stressed the rise in influence of the consumer: “Consumers are becoming aware. They want to know what they are spending now – they want real-time information. Consumers are being empowered from a thermostat on a radiator to decisions on demand response.”