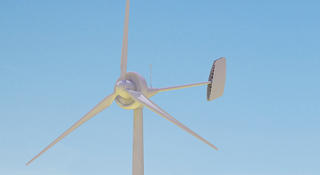 UK renewable energy supplier Ecotricity has launched what it calls a “groundbreaking new windmill” at the European Wind Energy Association conference in Paris this week.

The wind turbine is designed and manufactured in Britain by Ecotricity’s new subsidiary, Britwind, which it formed in 2014.

Ecotricity said the new turbine, dubbed the Britwind H15, “is set to bring big wind performance to small wind, generating electricity at almost half the cost of the best-selling small windmill on the market”.

Ecotricity founder Dale Vince said: “The Britwind H15 is at the cutting edge of windmill technology – it’s super-efficient, cheap to maintain, and cuts the cost of making energy.”

The Britwind H15 stands at an average height of 25m and the horizontal-axis windmill has a power rating of 15kW.

It is available in two versions to optimise use in higher or lower wind speed sites.