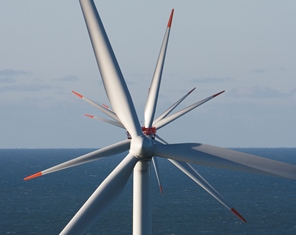 Dong Energy is hailing a wind power milestone as it has today installed 3000 MW of offshore wind capacity.

The latest turbine which has taken it to the 3000 MW mark is at Borkum Riffgrund 1 offshore wind farm in Germany, the 76th device installed at the site.

Dong Energy constructed the world’s first offshore wind farm in 1991 at Vindeby off the coast of the island of Lolland in Denmark.

That wind farm had a total capacity of just 5 MW and is still operational – it will celebrate its 25th anniversary next year.

“Both the turbine capacity as well as the overall scale of the wind farms we are constructing today are three to four times larger than that of those projects we constructed in 2002 and 2003.”

He said that while “this target is both ambitious and challenging, we’re building on our extensive experience and, every day… are taking another small step to ensure that we will reach our target”.