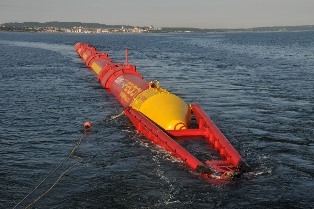 A buyer has been found for UK company Pelamis Wave Power, which went into administration last month, but the deal comes too late to save the jobs of the remaining staff at the renewable energy company.

Administrators KPMG today revealed that Highlands and Islands Enterprise has been chosen as the preferred bidder to acquire the assets of Edinburgh-headquartered Pelamis.

All but 16 of the Pelamis staff lost their jobs when the company went into administration, and those final employees will also be made redundant.

Blair Nimmo, joint administrator and head of restructuring at KPMG in Scotland, said: “Following the sales process, I am pleased to confirm that Highland and Islands Enterprise has been appointed preferred bidder in relation to acquiring the assets of Pelamis Wave Power Limited.à‚

“Over the coming days we will be working to finalise the sale and are hopeful that the transaction can be concluded in the near future.”

Pelamis went into administration on 21 November because it said it had been “unable to secure the additional funding required for further development of the company’s wave energy technology”.

In 2004 a prototype Pelamis wave power machine generated the first offshore wavepower to be put into the UK’s national grid.