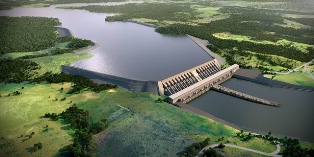 The Amazon is Brazil‘s “last electric frontier” and the government must ensure that it gives backing to hydropower projects in the region otherwise its energy potential will lie untapped.

That was the message at a special conference session at POWER-GEN Brasil, HydroVISION Brasil and DistributechBrasil in Sao Paulo.

Nivalde Jose de Castro, professor at Brazil’s Institute of Economics UFRJ, said 70 per cent of Brazil’s power potential was within the Amazon but added “you can’t cut off a tree branch without government support”.

He said private firms needed the backing ” if need be, financial, in the form of a state stake ” to be persuaded to go ahead with Amazonian projects, because without government support the opporsition from environmental groups to power projects was too great.

He said that with the support of state electricity company Electrobras, “all the on-going projects face huge challenges. I doubt that they will take off ” there are too many barriers”.

Electrobras holds a 49.98 per cent stake in the consortium behind the 11,223 MW Belo Monte project currently under construction.