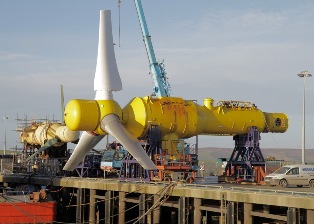 Alstom has hailed as a “major milestone” the news that its full-scale tidal device installed at the European Marine Energy Centre in Scotland has injected more than 100 MWh of electricity into the grid.

With a rotor diameter of 18 m, a 22 m long nacelle and a weight of 150 tonnes, the tidal turbine has three pitchable blades. It operates, fully submerged at a water depth of 40 meters, by rotating to face the incoming tide at an optimal angle, to extract the maximum energy potential.

Alstom acquired the turbine after it bought Tidal Generation Limited from Rolls-Royce at the start of the year when the 1 MW turbine was installed at the European Marine Energy Centre’s tidal test site in Orkney.

In July the device reached the full nominal power of 1MW after a series of gradual increases in power and had generated over 10 MWh of electricity.

Alstom New Energies senior vice-president Jacques Jamart said that reaching 100 MWh was “reinforcing our customer’s confidence in our technology and in our ability to propose a reliable machine to the market. With these tests Alstom is becoming one of the key stakeholders of the tidal stream market.”