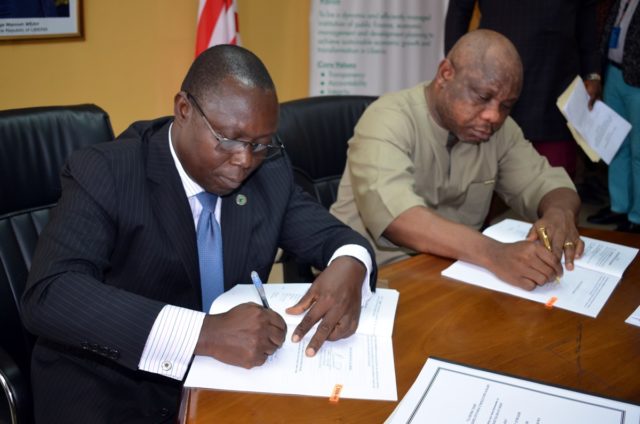 The Government of Liberia and the African Development Bank (AfDB) have signed Financing Agreements for two Projects valued over $33m. The two projects include the “Renewable Energy for Electrification of Liberia (REEL Project) and Support to Investment Promotion Agencies in Transition Countries”.

According to the Agreement, the REEL Project is expected to be implemented over a 4-year period and includes the development of a hydropower plant on the Gbedin Falls on the St. John River in Nimba County.

The dam is expected to have a capacity of 9.34 MW and will serve as a source of reliable, sustainable and affordable power in the region. It will also enable expansion of the power grid to isolated localities and remote areas, encouraging the connection of more households, schools, health centers, businesses and industries to the national grid.

The ”Support to Investment Promotion Agencies in Transition Countries Project” part of the agreement is supported by the AfDB under its “ADF-14 Transition Support Facility (TSF)” and is valued at $1m. This will be implemented over the course of three years and will support the Government of Liberia’s efforts to improve the business environment and investment climate.

Speaking during the signing ceremony, Finance and Development Planning Minister, Hon. Samuel D. Tweah Jr. lauded the African Development Bank for supporting the government’s development agenda. He added that the Bank’s support to the administration of President Weah remains strong.

Minister Tweah also revealed that the AfDB continues to be a key player in electricity, roads, governance and other sectors of the country.

The Finance Minister praised the Bank for passing the Country Paper for Liberia and disclosed that the Paper which focuses on roads, energy, and agriculture will see the country moving in the right direction.

For his part, AfDB Country Manager, Dr. Orison M. Amu underscored that the Projects are in support of Liberia’s development agenda.