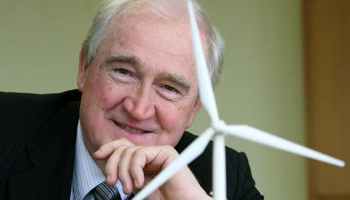 The Irish-based global wind and solar company, managed by Eddie O’Connor, has spearheaded the consortium which will see the addition of 360 MW in renewable power capacity added to the South African grid.

The Department of Energy in South Africa awarded the contracts initially in 2013 under the third round of its Renewable Energy Procurement Programme. The wind farms, which are all located in South Africa’s Northern Cape Province, add to the 238 MW of wind and solar projects awarded to Mainstream in the first round of the programme and all three projects are now in commercial operation.
Commenting on the announcement, Barry Lynch, Mainstream’s Managing Director, Onshore Procurement, Construction and Operations said: “Mainstream has been awarded more megawatts than any other Developer under the South African Government’s Renewable Energy Procurement Programme. Between Rounds 1 and 3 we have been awarded six projects with a combined capacity of nearly 600 MW. We are delighted to have recently delivered three wind and solar farms from Round 1 into commercial operation on budget and once again we are working with many of the same debt and equity partners, construction contractors and turbine supplier. Partnerships are very important for us and our success in South Africa is a great example of this.”

The South African wind farms that have reached financial close are:

•    The 140MW Khobab Wind Farm located in the District Municipality of Namakwa in the Northern Cape.

•    The 140MW Loeriesfontein 2 Wind Farm located in the District Municipality of Namakwa.

•    The 80MW Noupoort Wind Farm located in the Local Municipality of Umsobomvu in the Northern Cape.

The debt for the projects has been arranged and underwritten by Barclays and the Development Bank of Southern Africa. The consortium of Murray & Roberts and Conco has been appointed as construction contractor and Siemens Wind will supply and install the wind turbines.