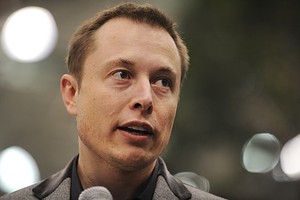 DemandLogic, an innovation developed by US-based SolarCity, could potentially solve the difficulty of how to store renewable power.

SolarCity, which is backed by PayPal and Tesla billionaire Elon Musk (pictured), the company’s chairman, has launched a battery pack for Tesla cars that store electricity from solar panels.

SolarCity’s battery system is not a widely affordable answer yet, analysts say, but it could still help advance important shifts in the way energy is used.

The system is being rolled out first to US businesses because it is aimed at cutting a growing energy cost: the charges that utilities impose, not just for the amount of electricity a company uses, but for the level of power it needs at any point in time.

The impact of the technology on the broader energy market is not yet clear because of the high price of the lithium-ion batteries it uses, but those battery prices are falling fast. Smaller lithium batteries, such as those that power laptop computers, now cost $200-$250 per kilowatt hour, compared with $1,200 three years ago, while larger ones used in electric cars are half what they were two years ago.