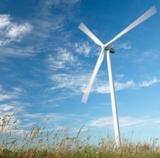 Vestas has won an order for 350 MW of turbines from Enel Green Power North America for a wind farm in the US.

The deal is for 175 of Vestas’ 2 MW turbines and the company says there is scope for an order of a further 636 MW-worth of turbines.

The value of the deal and the location of the wind farm have not yet been disclosed, while the turbines will be delivered next year and into 2015.

Vestas has also clinched a contract to supply 17 of its V112-3.0 MW turbines (pictured) for a wind farm in central France.

The Moulin d’Emanville wind farm will be installed in the Eure et Loire and will be the largest project in the country to operate on V112-3.0 turbines.

It also marks the first collaboration between Vestas and operator JP Energie Environnement, which currently operates six wind farms and 66 photovoltaic plants with a total of 91 MW of installed capacity.

Vestas will deliver, install and commission the plant and has also signed a 15-year service and maintenance agreement.

The turbines are scheduled to be delivered in the second quarter of 2014, with commissioning expected by the third quarter.

Nicolas Wolff, general manager of Vestas France, said the deal “opens new opportunities for both companies and for the country’s wind power development”.