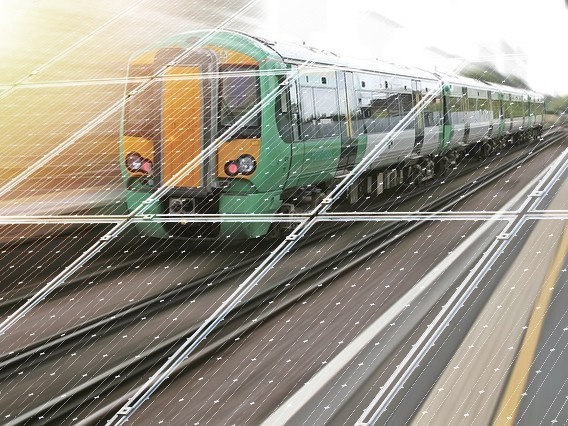 The world’s first solar farm to directly power a railway line is due to plug into the track in the UK, pioneering the path for solar-powered trains in Britain and across the globe.

The 30kW pilot project site consists of 100 solar panels and will power the signalling and lights on Network Rail’s Wessex route. It is the first time a solar array will bypass the electricity grid and plug directly into a railway’s traction system.

The venture was developed by the charity group 10:10 Climate Action, together with Imperial College London and research team Riding Sunbeams.

Network Rail hopes to use this scheme to charge rail lines across the UK, a feasible plan in light of the falling cost of solar technologies which will allow these subsidy-free solar farms to supply power at a lower cost than the electricity supplied via the grid.

Stuart Kistruck, a director for Network Rail’s Wessex route, said: “We have ambitions to roll this technology out further across the network should this demonstrator project prove successful, so we can deliver a greener, better railway for our passengers and the wider public.”

Riding Sunbeams estimates that solar could power 20% of the Merseyrail network in Liverpool, as well as 15% of commuter routes in Kent, Sussex and Wessex. There is also scope for solar trams in Edinburgh, Glasgow, Nottingham, London and Manchester, according to the team.

Research into the concept began over two years’ ago and received a boost when Innovate UK awarded them funding from the Department of Transport, after proving that connecting solar power directly to rail, tube and tram networks could help meet a significant share of their electricity needs.

Leo Murray, the director of Riding Sunbeams, said future projects could be community-owned, and repay benefits to local community funds. By the end of 2020, Riding Sunbeams hopes to build and connect the world’s first-ever full-scale community- and commuter-owned solar farm to UK railways.

Murray estimates massive savings for the railways in terms of running costs and efficiency. “Matchmaking the UK’s biggest electricity user, the railways, with the nation’s favourite energy source, solar power, looks like the start of the perfect relationship”, says Murray.