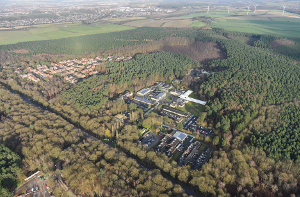 Portland College, an education centres for UK adults with disabilities, has reduced its energy bills by 15% with the installation of a 186 kWp rooftop solar array.

Installed by EvoEnergy, the 772-panel system (pictured) covers six rooftops at the college near Mansfield, Nottinghamshire, and is expected to generate an estimated 143 MWh annually.

Scott Roadley, project manager for EvoEnergy said of Portland: ‘It’s a big organisation and it had the big emissions to match – almost 1.2 million kWh per year. Solar made good sense as a way to cut costs and give them an ongoing income stream as well’.