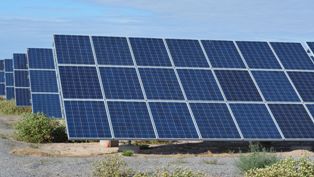 The 7 MW Chimbera solar plant in San Juan is one of the largest in South America and runs off 8400 of REC’s Peak Energy Series solar panels.

The ground-mounted REC installation covers around three hectares and is expected to deliver 3900 MWh of electricity each year.

The electricity is fed into the grid and sold to energy providers through a government-supported power purchase agreement.

Santiago Lagos, chief executive of 360 Energy, said the project was “hugely important to the future of solar energy in Argentina”.

Luc Graré, REC’s senior vice-president of solar sales, said: “We are pleased to be on board this exciting project with 360 Energy in Argentina and are looking forward to expanding our involvement as the country moves forward with its solar electricity initiatives.”

REC believes Argentina offers excellent growth opportunities for solar. The company says the western region of the country “benefits from twice the solar radiation of Germany, making solar a viable source to meet more of the country’s electricity needs”.

“With incentive programs and generous feed-in tariffs now in place to jump-start its burgeoning solar industry, Argentina is in an ideal position to drive large-scale solar projects forward,” said REC.