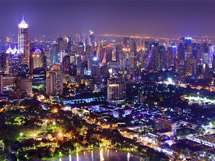 The investor landscape in southeast Asia has changed rapidly in recent years, with local banks and institutions entering a market that they had previously left well alone.

The challenges and opportunities of the Asia power investment sector were put under the microscope at a special panel session at POWER-GEN Asia in Bangkok.

It was chaired by Edward McCartin, senior vice-president of Synova LLC, who wanted to discuss what’s going on right now in cross-border transactions in southeast Asia and compare the experiences of developers, financiers and advisors across the region.

Speaking before the session, McCartin told Power Engineering International that he wanted to “examine the tension and the challenges of trying to fit renewable energy projects and keep them alive. With coal being as cheap as it is, it’s very difficult to do renewable projects and get the necessary finance.”

He said that southeast Asia had seen new investors coming in who were financial players rather than “your traditional power companies, but those guys also have their own objectives and their own proclivities that don’t necessarily fit with a 25 or 30 year power development”.

“Similarly with financing we are seeing local banks in places like Thailand and the Philippines ” and certainly India ” who are the ones driving the bus in terms of financing projects, but international financiers are still important in places such as Myanmar, Indonesia and also Singapore.”

McCartin said that power was “going through a change. A lot of the power companies out of the US and Europe are evaporating out of the region and we are seeing very strong activity from the Japanese and the Korean trading companies. And the Chinese are starting to move into that bit of the business and not just technology.”

But he stressed that the ASEAN region “is still a very solid place to be putting your investment dollars”.

Once the session was underway, the subject of renewables was tackled and Cyril Cabanes, senior vice-president of development at Marubeni Asian Power Singapore said that the most important thing for renewable investors is regulatory certainty.

Cabanes said that the role of governments in the region was to “keep the train moving. The train may slow but it must keep moving. But if you leave it to the market, then the train will stop and that will be very uncomfortable for the passengers.”

Justin Wu, head of Asia-Pacific at Bloomberg New Energy Finance, said that the drivers behind renewable developments in Asia have changed, particularly in China. “Most new developers in China don’t care about carbon emissions ” they are building renewables because there is a desperate need for energy.”

Saud Siddique, executive chairman of Singapore-based Odyssey Capital, said that “investors have come to understand the risks of power projects. They have understood that the best investments are underpinned by good governance and law and environmental issues are dealt with.”

One type of financing that is struggling in Asia is private equity. Gregory Karpinski, chief executive of MAXpower Group said that “private equity in Asian infrastructure is a horrible mix”.

The panellists were asked to pick the countries that offered the best opportunities for cross-border investment.

McCartin opted for the Philippines ” “a very solid place” ” but he warned that “competing with the local guys is hard ” they are very savvy”.

Kaminsky and Cabanes also picked the Philippines while Mark Hutchinson, an energy expert with Thailand’s Advisors in Energy, singled out Thailand: “Very stable, long term predictability and the general ease of doing business.”