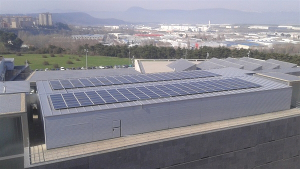 The building housing the Library and Film Archive of Navarre (pictured), located in northern Spain, has been equipped with a self-consumption roof-mounted solar photovoltaic (PV) system.

The roof-mounted system, featuring 246 solar panels and two three-phase inverters made by Ingeteam, has an installed power of 51.66 kWp.

The system has an estimated PV energy production of around 52 MWh a year, representing considerable savings.

No energy from the project will be injected into the grid.