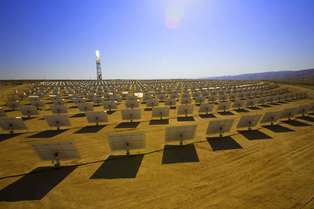 Heat from the giant Ivanpah solar plant in the Mojave Desert is incinerating birds in mid-air as they fly over the 393 MW facility.

Co-owner BrightSource Energy says 1000 birds a year are killed but the environmental group the Center for Biological Diversity puts the figure at 28,000.

Workers at the $2.2m plant in the US are said to have a name for birds that ignite as they fly overhead ” ‘streamers’ ” because of the smoke plume they create in the air.

Federal wildlife investigators say that the solar plant may well act as a ‘mega-trap for wildlife: the bright lights of the mirrors attract insects which in-turn attracts insect-eating birds.

Investigators who visited the plant say that they witnessed one ‘streamer’ every two minutes, but this is disputed by NRG Energy, which in a statement said that between January and June, some 321 birds had been killed.

The company said that it is “very serious about minimizing the impact to wildlife surrounding Ivanpah and committed to monitoring and implementing changes to decrease the actual number dramatically”.

It added that it had worked with the US Fish & Wildlife, the Bureau of Land Management and the California Energy Commission “since Ivanpah was being built” and à¢€¦ “none of these agencies have asked that operations at Ivanpah be halted”.