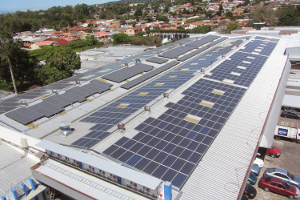 A new solar photovoltaic (PV) rooftop plant in El Salvador has been commissioned by Martifer Solar.

Developed by Martifer’s local partner, DESENI, the project was built for distribution company DISZASA at its San Salvador headquarters. The plant, with a total installed capacity of 300 kW, comprises approximately 1000 solar panels with an area of 2000 square metres.

It is expected to produce an estimated 486 MWh per year, reducing the commercial facility’s energy bill by up to 18% annually.

‘The Salvadoran photovoltaic market is evolving and solar energy will be highly important in the energy mix of the country. There is great potential for the development of solar installations on rooftops, especially in commercial and industrial buildings,’ said Ismael García, Head of Business Development for Central America and the Caribbean for Martifer Solar.

Martifer Solar says it aims to implement more than 2 MW of solar PV rooftop plants for various commercial and industrial clients in the country throughout 2015.