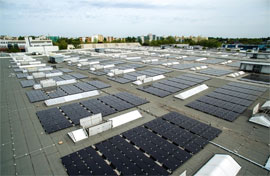 GE, in partnership with Kofler Energies and Belectric, has commissioned a new hybrid power plant in the Marienfelde district of Berlin, Germany, featuring photovoltaic panels, a Jenbacher combined heat and power (CHP) unit and storage.

The plant will not only supply power and heat to the GE Power Conversion production site in Marienfelde, but will also feed power into the grid. The CHP system uses a Jenbacher J312 gas engine with integrated heat storage and an efficiency level of 89.2%. The 400 kWe system covers the basic heat load of the site during the heating season with 491 kWth while the site has a heat demand of around 3000 MWh per annum.

A 600 kW solar power system has been installed on the roof of the production hall. Surplus power is stored in a battery with a capacity of 200 kWh. Surplus electrical power is supplied to the public grid if the battery is completely full. An energy management system and comprehensive operational oversight allows the power output to be controlled to meet demands as efficiently as possible. Furthermore, GE says the system is based on a scalable business model that also can be adapted for larger units.

Günter Nickel, CEO of Kofler Energies AG, says: ‘During the heating season, most of the power is produced via CHP, while the amount generated by the solar power system increases in the warmer months of the year. The battery can be used to deal with any temporary surpluses or shortages of power. This combination enables a very high degree of self-sufficiency, ensures a reliable supply and offers the opportunity to store surplus energy and use it efficiently, either internally or externally.

According to GE, the amendment of the German Combined Heat and Power Generation Act (KWKG) looks set to increase the target share of electricity produced via CHP to 25% by 2020.