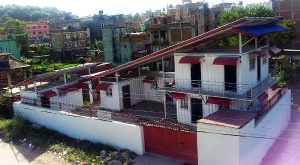 Nepal’s Red Cross Society is building a new blood bank that will be powered with solar energy. Solar modules are being installed on the building’s south-east facing sloping roof, while batteries will be stored securely.

Located in the suburb of Lalitpur in Kathmandu, as well as solar generators the centre can also be run off the city’s main power grid, and will feature backup diesel generators too.

Supported by the British Red Cross as part of a project helping the city prepare for earthquakes, the two-storey blood bank will be the first structure in Kathmandu built using steel shipping containers bolted together.

Shipping containers are cost effective and less likely to be damaged by earthquakes than brick or concrete buildings, the Red Cross says. The Nepalese Red Cross Society has a permanent blood bank next to one of the city’s hospitals but the new facility being built this year is much more likely to survive a major earthquake. The new building is set to open in December.

Ashok Nawani, British Red Cross logistics manager, says: ‘In emergencies, the power is often the first thing to go out.’