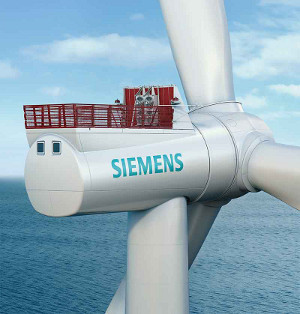 The €200m ($218m) facility will manufacture parts for the firm’s 7 MW turbines (pictured). It will handle the assembly of generators, hubs and nacelle back-ends to form complete nacelles, Siemens said.

Planned to begin operation in mid-2017, the facility is expected to create up to 1000 new jobs in and around the town of Cuxhaven in Lower Saxony.

With an area of 170,000 square metres (the size of roughly 24 football fields, Siemens noted in a statement), the factory will be located at the edge of Cuxhaven’s harbour, allowing heavy components to be loaded directly onto transport vessels.

“We’re looking forward to building at this factory the most efficient and reliable ‘Made in Germany’ wind turbines,” said Markus Tacke, CEO of Siemens’ Wind Power and Renewables Division. “We invest where we see opportunities for growth – and Germany and Northern Europe are dynamic growth markets for us.”

Siemens is also currently constructing a plant in Hull, UK which will produce rotor blades for its 6 MW and 7 MW turbines and is also scheduled to be fully operational in 2017.