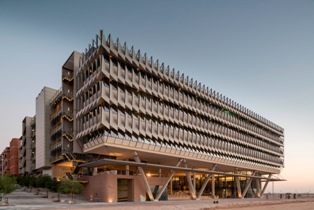 German engineering giant Siemens says the opening of its new Middle East headquarters in Abu Dhabi is an “important milestone in the company’s history”.

This week Siemens inaugurated the building in Masdar City, Abu Dhabi’s sustainable city, claiming that it “has become a benchmark for future projects in the Middle East and beyond, due to the sustainability standards and development methodology used in building it”.

Dietmar Siersdorfer, chief executive of Siemens Middle East and UAE, said that the opening “is testament to our unwavering commitment to the UAE and the Middle East”.

“After more than 150 years in the region, we are proud to achieve another important milestone in the company’s history.”

Designed by architects Sheppard Robson International, the Siemens headquarters is said to be one of the most energy-efficient buildings in the region, reducing energy consumption by almost 50 per cent compared to conventional buildings of the same size.

Based on the concept of a ‘box within a box,’ the structure has a highly insulated, airtight inner facade designed to reduce thermal conductivity, and a lightweight aluminum external shading system, which minimises solar gain while maximising daylight and views from the building. Integrated Building Technologies from Siemens ensure that energy supply is correspondent to demand, facilitating efficient use of resources.