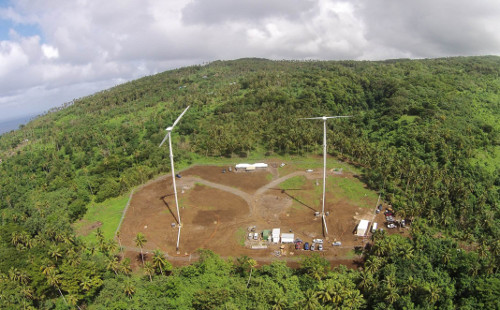 The island nation of Samoa’s first wind farm was inaugurated in a ceremony this week by the Prime Minister, the Honourable Tuilaepa Aiono Sailele Malielegaoi.

The 550 kWe wind project (pictured) on the island of Upolu, which is home to nearly 75 per cent of Samoa’s population, is projected to deliver $475,000 per year in fuel cost savings and 1500 MWh of power per year, as well as reducing the island’s annual CO2 emissions by over 1000 tonnes.

The project was built by Abu Dhabi renewable energy company Masdar with financing from the UAE’s $50m Pacific Partnership Fund, which supports the deployment of renewable energy across Pacific island states.

The wind farm includes two 55 metre high turbines in a bespoke ‘cyclone proof’ collapsible configuration. The turbines can pivot at the base and be lowered and locked in place in less than an hour, Masdar said.

In his inauguration speech, Malielegaoi said, “The new wind farm delivered by Masdar and funded by the ADFD is a significant step forward in Samoa’s transition to a more sustainable energy future. This has been possible thanks to the support of Abu Dhabi and the United Arab Emirates, and their commitment to advancing sustainable development. Access to renewable energy is vital to our long-term economic development, even beyond the substantial gains realized by cutting our dependence on imported fuel.”

The Samoan project is the second to be completed under the fund, with the first being a 512 kWe solar photovoltaic (PV) installation in Tonga. In addition, Masdar said it has undertaken solar PV projects in Fiji, Kiribati, Tuvalu and Vanuatu.