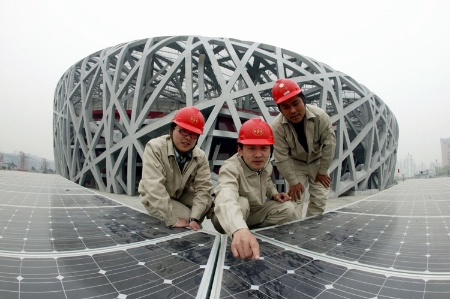 Small-scale, on-site solar power installations are set to see a dramatic upswing in China as the country responds to a historic climate agreement with the US this week.

Beijing is promoting the installation of solar photovoltaic panels at factories, schools as it looks to meet a goal of installing over 8 GW of distributed solar systems by the end of 2015, according to Bloomberg New Energy Finance.

Most of that the country’s solar capacity to date has come from massive solar farms in remote locations and policy makers are now promoting smaller systems closer to where they’re needed, in response to a growing air pollution problem.

China’s National Energy Administration introduced policies in September aimed at boosting the use of distributed solar power. Companies both in China and in other regions are responding. For instance, Solar Power Inc., a US developer backed by the Chinese manufacturer LDK Solar Co., said it would build 19 MW of rooftop systems in Shandong.

Meanwhile SunEdison is in talks with a Chinese partner to build a factory in the country and agreed last month to jointly create a $220 million fund to develop as much as 1 GW of solar projects there.