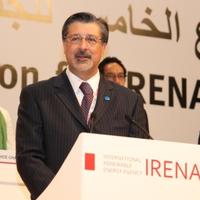 The director-general of the International Renewable Energy Agency has said that “one of the myths about renewable energy projects is that there are not enough of them out there”.

This, said Adnan Amin yesterday, is simply not true and he added that these projects are strong enough to attract investment.

à‚ He explained that the six projects that won yesterday’s funding from IRENA and the Abu Dhabi Fund for Development were chose from a list of 80 worth more than $800m.

à‚ “And we are expecting the volume for the next cycle of financing to be substantially higher” he added.

Amin said that there was “tremendous growth in renewable energy investment in the GCC”, adding that the “leader in the process is the UAE.”

à‚ Indeed, he said the establishment of Masdar in Abu Dhabi had been “the trigger for [renewables] awareness in the region”.

à‚ “Almost every country in the region is now setting renewable energy targetsà¢€¦ and we are seeing more and more ambitious projects for the future.”

If the number of potential projects is growing, what is falling is the global level of renewable investment.

“That is disappointing,” said Amin, but added that it was “understandable” given the recession in so many areas which had previously been leaders in investment, such as Europe.

However he added that the consolidation that has swept across many parts of the sector would result in “the emergence of a much leaner, cost-competitive industry”.