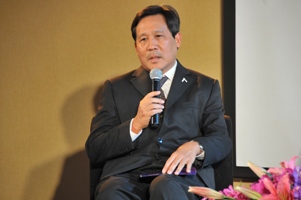 Currently, Thailand is predominately dependent on natural gas for its electricity production, but with production falling in the Gulf of Thailand it is facing the prospect of relying more heavily on gas imports, such as LNG, which will prove costly.

According to the government’s Alternative Energy Development Plan, Thailand is aiming for renewable energies, in particular solar photovoltaics and biomass, to contribute 25 per cent to the generation mix by 2021.

Dr. Amranand (pictured), who was energy minister between October 2006 and February 2008, said he believed that “this target was achievable as long as the right government policies were in place”.

Dr. Amranand is now chairman of the Energy for Environment Foundation.

Also participating in the keynote was Dr. Twarath Sutabutr, who recently took up his post as deputy director general at the Ministry of Energy’s Department of Alternatives Development and Efficiency.

Thus, in addition to reaffirming the government’s commitment to renewable energy development in his speech, Dr. Sutabutr also emphasized the importance of achieving greater energy efficiency to ensure that Thailand establishes a ‘low-carbon society’.

Thailand has actually been one of the region’s most progressive countries in encouraging energy efficiency in the retail consumer sector, running a successful demand-side initiative since 1993.