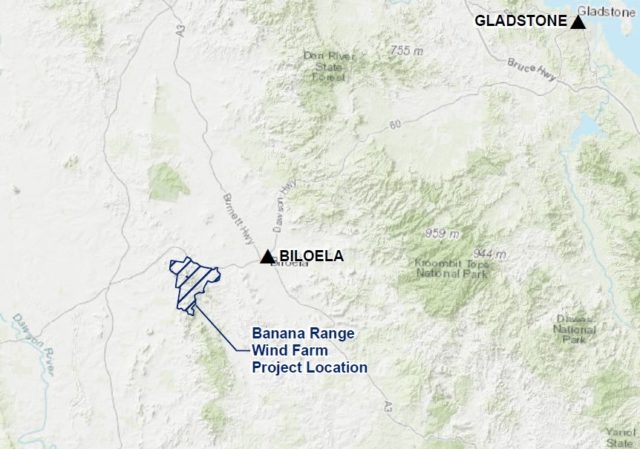 A new $350m wind farm in Australia has been given the go-ahead by the Queensland Government. The project will create up to 150 construction jobs and will add to the big surge in wind power now coming online in the state.

The wind farm will consist of 50 turbines and will produce most of its power overnight from its site on the Banana Range, an area known for its strong overnight winds.

Minister for Planning Cameron Dick said the new wind farm will boost the total capacity of wind generation approved by the Queensland Government to 2240 MW, enough to power over one million homes.

“With up to 150 construction jobs and up to 15 ongoing jobs, the Banana Range Wind Farm will not only generate electricity for homes and businesses but will be an economic energy source for the surrounding region. The Banana Range wind farm will generate around 180 MW at capacity, which will power around 120,000 homes, around five times the number of houses in Gladstone.

Lacour Energy director James Townsend said the wind farm is in an area of excellent wind resources with an existing high voltage 132-kilovolt transmission line running through the project site, which will connect the wind farm to the power network.

“The area is known for its strong nighttime winds which is when the wind farm will produce the most energy,and this means the project is very complementary to the daytime energy from rooftop solar and the solar farms that have recently been built in Queensland.

“We estimate there will be an injection of $30-40 million into the regional economy during the construction through the employment of local contractors and service providers. In addition to the construction of the wind farm, we are also going to provide $100,000 each year to support projects or initiatives in nearby communities through a community benefits fund.”

Construction will begin in 2020 and will take approximately 24 months to complete.

The project is being undertaken by Orange Creek Energy Pty Ltd, a subsidiary renewable energy company of Lacour Energy based in Brisbane.

Minister for Energy Dr Anthony Lynham said this project added to the state’s numerous renewable projects, placing further downward pressure on electricity prices and taking Queensland closer to our renewables target of 50 per cent by 2030.

“Queensland has more than 2370 MW of large‑scale renewable energy capacity operating already and another 250 committed or under construction. Around 18,000 MW more of large-scale renewable capacity is currently at earlier stages of development,” Dr Lynham said.

Other wind farms in the region include Coopers Gap wind farm (453 MW is operational but still under construction), the Mount Emerald Wind farm near Mareeba producing power for 75,000 homes, Kennedy Energy Park near Hughenden (43 MW) and Kaban Green Power Hub in the Tablelands with 130 MW capacity.

“Together, these projects represent more than $5 billion in capital investment and more than 4500 constructions jobs in regional Queensland, states Dr Lynham.”