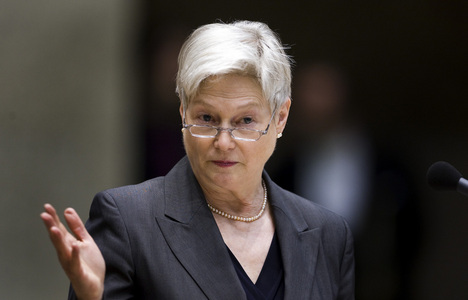 Growth in renewable power deployment is projected to slow worldwide over the next five years unless nations address policy uncertainty, the International Energy Agency (IEA) has warned in a new report.

Power generation from renewable sources grew by 240 TWh in 2013 to reach 5070 TWh, or almost 22 per cent of global generation, the IEA’s Medium-Term Renewable Energy Market Report said, putting renewables on par with gas. Global investment in new renewable power capacity was estimated at around $250bn in 2013.

In its forecast to 2020, the IEA sees global renewable generation growing by 45 per cent to make up almost 26 per cent of the world’s power generation. However, this growth is predicted to slow as early as this year and to stabilize thereafter, putting many nations’ climate change targets at risk.

Renewables investment figures for 2013 were down from previous years. In a presentation to journalists, IEA head Maria van der Hoeven (pictured) warned that policy risk is the main barrier to investment in renewable power worldwide. Policy changes must be predictable, she said, and retroactive changes must be avoided. And, she said, given the capital-intensive nature of renewable power projects, market contexts must ensure reasonable and predictable returns.

For example, in China and other non-OECD markets where growing concerns over air quality are driving renewables growth, development is hampered by non-economic barriers, an absence of grid integration measures, and the cost and availability of financing. In the EU, there is uncertainty over the exact nature of the bloc’s post-2020 renewable policy framework ” including the questionable effectiveness of a non-binding target for 2030 ” and plans for a European ‘supergrid’ to help with renewables integration. à‚

In the US, added Paolo Frankl, head of the IEA’s renewables division, uncertainty over the extension of the Production Tax Credit (PTC) at the end of 2012 significantly slowed renewables growth in 2013. The PTC comes up for renewal each year.

In the Middle East, where energy security concerns have given rise to a “huge” interest in solar power, van der Hoeven referred to the example of Saudi Arabia where, “despite the adoption of long-range targets and new policies including long-term power purchase agreements, they still have policy frameworks requiring further clarification and a number of economic barriers”.

In a comment on the report, Justin Wilkes, deputy CEO of the European Wind Energy Associaton (EWEA), agreed that investment depends on stable policies. “It’s imperative that national governments resist making abrupt changes to support mechanisms that can blindside investors and deter financing of wind power projects,” he said. “Political and regulatory risk is reflected in the cost of capital and a stable framework can go a long way to eliminating these risk premiums.”