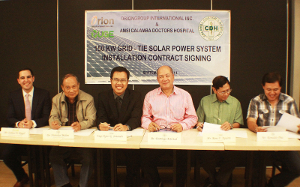 The partnership includes the provision of flexible finance mechanisms for Filipino businesses to pay less or zero upfront cost for installing solar systems, paying a fixed monthly rate as an alternative.

Among the projects supported under the financing programme a 150 kW solar system and wind turbine is to be installed at Calamba Doctors Hospital, significantly reducing energy bills.

A further five orders for a total of 240 kW of renewable energy systems are in the pipeline, the companies say, having previously collaborated on several other solar and wind energy projects.

Businesses in the Philippines face some of the highest grid energy costs in Asia.