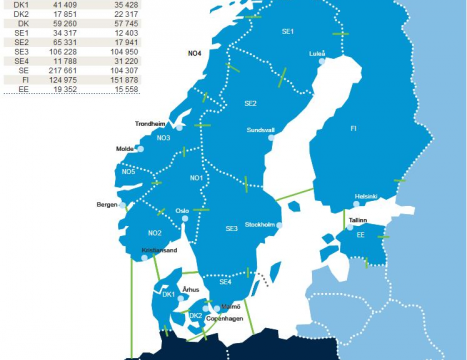 The Nordic energy market needs “even more far-sighted and continuous policies” if its success it to continue, according to new analysis from Finnish energy firm Fortum.

The company’s second Energy Review, released this week, said the Nord Pool Spot market (which trades around 90  per cent of Nordic power generation and comprises Sweden, Norway, Finland, Denmark, Estonia, Latvia and Lithuania) is “a real example of a functioning regional electricity market offering its customers energy at competitive prices, good security of supply, and one of the world’s lowest energy production emissions per kWh” and “is, so far, a success story on power market liberalization and integration.”

However, it added that an influx of renewable energy and changing consumer behaviour have increased power system intermittency and made balancing the grid more expensive, while poor economic performance and weak power demand have put pressure on power prices and weakened the energy investment climate.

While the Nordic countries’ generation mix, which includes large hydropower assets, have easily absorbed the new intermittency so far, “it is not certain that the situation will prevail” or that “long-term generation adequacy can be secured without developing the power market further”.  Without “determined actions”, Fortum said, the market could be in danger.

Among the report’s key recommendations were treating Nordic electricity systems as a single power system rather than a collection of national systems; further grid reinforcement within and between countries, with a third interconnector between Sweden and Finland given “high priority”; and phasing out renewables subsidies, to be replaced by the EU Emissions Trading System (ETS) as the primary driver of decarbonization.

One effect of increasing amounts of renewable energy on the grid, the report noted, is that power price volatility is expected to increase. To address this, it said wholesale prices should always be based on scarcity pricing, and retail markets must be better integrated with wholesale markets. In addition, the retail power market should be developed further, with customer participation encouraged and a supplier-centric model implemented in all Nordic countries.