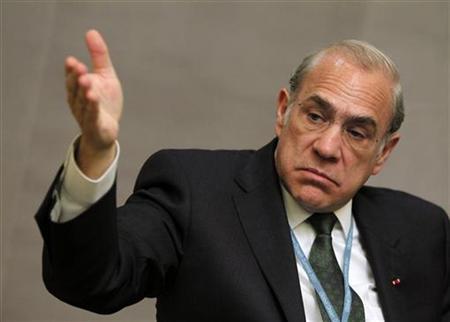 Angel Gurria, the head of the Organisation for Economic Co-operation and Development (OECD) has used a speech in London on Wednesday to tell world leaders that fossil fuels must be eliminated as there will be ‘no bail out’ for the Earth’s climate.

The secretary general said there needs to be a ‘big, fat price on carbon’ and governments shouldn’t presume that carbon storage is a way out, since it is unproven on a large scale.

He said simply reducing emissions would not be enough to lower the economic costs because carbon dioxide accumulates in the atmosphere.

Mr Gurria, in tandem with UN Secretary-General Ban Ki-moon, is trying to galvanise action for an ambitious agreement in the planned 2015 UN climate conference in Paris.

His remarks were aimed both at countries which had not embraced the challenge of reducing emissions and those which had taken a leadership position but were now starting to wobble.

Sixty per cent of every tonne of CO2 emitted now will still be in the atmosphere 20 years from now and 45 per cent 100 years from now, he said, citing a scientific report this year from several universities and research centres around the world.

Speaking at a lecture co-organised with the London School of Economics and the Climate Markets & Investors Association (CMIA), Mr Gurria said, “Unlike the financial crisis, we do not have a ‘climate bailout option’ up our sleeves. And despite all the attention given to climate change deniers, our understanding of the scale of the risk is much better developed than our understanding of the financial risks, pre-crisis.”

Mr Gurria also warned that renewable technologies will be harmed by stop-start policies.

Governments are working to get a global deal to cut emissions signed by 2015, to come into force by 2020, but Gurria warned that a lot more immediate progress needs to be made.

The OECD is to publish a paper on effective ways of managing carbon cuts in the economy.