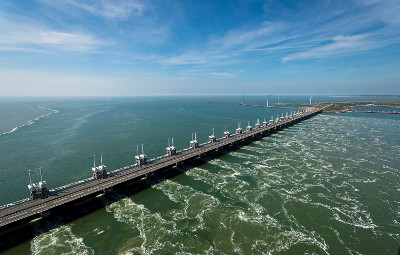 A 1.2 MW tidal power array has been installed as part of the Netherlands‘ Eastern Scheldt storm surge barrier, the company behind the project has announced.

The suspension structure, which is 50 metres long and 20 metres wide, was constructed by mechanical engineering firm Huisman to fit into the existing barrier, which is the largest of the Delta Works series of dams and barriers designed to protect the Netherlands from North Sea flooding.

Tocardo said its T2 turbines are fitted with bidirectional rotor blades, enabling them to generate power during both ebb and flood ” for example, when the barrier closes in response to an approaching storm.

The project was finished in nine months and installed during a single two-hour window. It is expected to generate power for around 1000 Dutch households.

“This project marks an important step in the development of tidal energy. Tidal technology is innovative and could grow into a significant Dutch export product. The export expectation of tidal energy is more than 200 GW,” said Tocardo CEO Hans van Breugel.

Huisman CEO Joop Roodenburg said: “For the future we focus on upscaling the installations. However, this requires a large investment, a realistic rate for tidal energy and a touch of idealism. Then we can build an important export industry.”

Funding for the project came from the province of Zeeland, the European Regional Development Fund and the Dutch government.