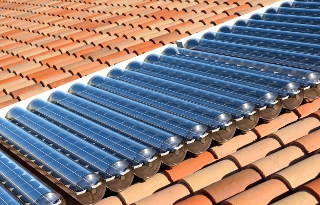 The maker of a hybrid solar photovoltaic technology that generates combined heat and power has been awarded €1 million (US$1.66 million) in funding towards commercial launch.

Naked Energy, maker of the Virtu hybrid solar system, received the award from the UK’s Department of Energy and Climate Change, through its Energy Entrepreneurs Fund. The company has also received a €300,000 ($497,000) grant from The Climate-KIC, a European public-private innovation partnership, which focuses on addressing climate change.

Known as photovoltaic thermal collectors, or PVT, hybrid solar-CHP systems combine photovoltaic panels with solar thermal collectors which draw heat away from the PV panel in order to maintain an optimum operating temperature and improve efficiency. The heat can then be used for space and water heating, cooling and desalination.