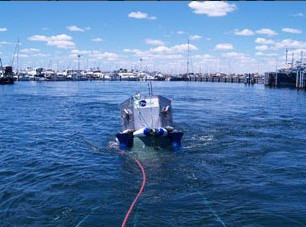 A wave energy project slated for Western Australia aims to help commercialize the technology and eventually power an entire community, its developers have said.

Initial installation of Stonehenge’s 1.5 kW Protean wave energy converter (pictured) is to be followed by a demonstration array of 30 devices. The project aims to take advantage of the region’s estimated wave energy resource of 20 kW per metre.

The Protean device can extract energy from a multitude of directional ocean forces rather than just one or two like many other wave energy devices, Stonehenge said, allowing it to deliver constant baseload power under a range of conditions. A proof-of-concept prototype has been successfully deployed, the firm added.

Bruce Lane, managing director of Stonehenge, said: “We are very pleased to have the opportunity to work with the team at YBJV. We identified early on that Two Rocks would be an ideal location to demonstrate the Protean WEC technology. To be able to demonstrate the technology at Two Rocks, in the context of a potentially significant commercial project, with the support of an influential partner of YBJV’s calibre is a significant bonus for the company.”