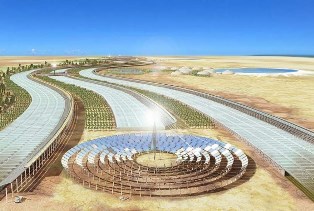 King Mohammed VI switched on phase one of what is being touted as the world’s largest solar power plant at a ceremony in Ouarzazate, Morocco on Thursday.

Noor 1, Phase one of the $9bn Ouarzazate concentrated solar power plant, on the edge of the Sahara Desert, provides 160 MW of its ultimate 580 MW capacity.

The king will then lay the foundations for Noor 2, the next stage of the mega-solar complex. By the time the plant is fully completed it will provide electricity for 1.1 million people.

The plant will initially provide 650,000 local people with solar electricity from dawn until three hours after sunset. Some $3.9bn has been invested in the complex, including $1bn from the German investment bank KfW, $596m from the European Investment Bank and $400m from the World Bank.

“It is a very, very significant project in Africa,” said Mafalda Duarte, the manager of Climate Investment Funds (CIF), which provided $435m (à‚£300m) of the $9bn project’s funding. “Morocco is showing real leadership and bringing the cost of the technology down in the process.”

The north African country plans to generate 42 per cent of its energy from renewables by 2020, with one-third of that total coming from solar, wind and hydropower apiece.

Morocco hopes to use the next UN climate change conference, which it hosts in November, as the springboard for an even more ambitious plan to source 52 per cent of its energy from renewable sources by 2030, according to the Guardian.

CIF estimates that if international banks and governments deployed another 5 GW of solar energy, electricity production costs could fall by 14 per cent. Scaling that up to 15 GW would cut costs by 44 per cent.