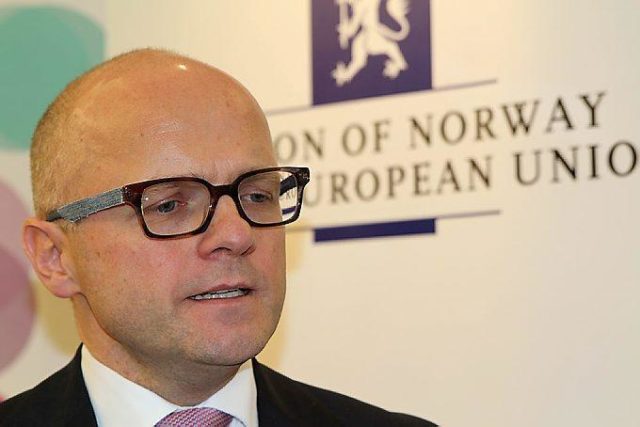 Norway is having to adapt, in the face of more sustained uncertainty in global energy markets than it has experienced in decades, but its environment minister says European demand for its gas and the prospect of carbon capture and storage technology success provides some succour amid the confusion.

Speaking to Power Engineering International at the fringes of the New York Times Energy for Tomorrow conference in Paris, Minister of Climate and the Environment Vidar Helgesen outlined some of the challenges the country faces in contending with the new paradigm.
“Oil and gas is, of course, a big part of our national income. In that area we are facing for the first time a situation whereby peak oil is no longer a question of supply, it a question of demand. Demand risk has entered the frame and we are adapting to a situation in our economy where oil and gas are no longer the driving force in the economy.”

“That has wide ranging implications. In terms of the energy policy dimensions we see Norwegian natural gas as an important bridging energy source towards renewables and underpinning the European renewables revolution simply because it is a supply that is more stable so far than renewables. As for oil and the global economy a huge amount will depend on demand, much of it depending on its relevance in the transportation section. The picture is more uncertain than it has been in previous decades.”

With Norway being so generously endowed with renewable resources does the minister envisage a scenario whereby gas is consigned to irrelevance, in the case of a utility scale storage breakthrough? The renewable proportion of the country’s power supply is after all currently running at 97 per cent.

“This is part of the picture of increasing uncertainty we are facing. The gas is primarily a question answered by the European market and the signals from the EU are that they will rely on significant levels of our gas for the coming couple of decades.”

“But we also see that development in renewables is gaining pace, potentially exponentially, so we have to live with a level of uncertainty that we haven’t seen in the past.”

Norway’s enviable position as a leader in renewable energy is also facing some challenges. Essentially the country has long been powered mostly by hydropower, but is now incrementally adding to its wind capability, currently constructing the biggest onshore EU wind farm. The era of huge new hydropower projects is probably over, Helguson says, due to biodiversity concerns, but Norway is looking to make the existing plants more efficient and productive.

Despite that disruption to decades of comfortable predictable electric power, given Norway’s natural advantages, the questions remains: shouldn’t it be to the forefront in leaving fossil fuel power behind?

Experts say its vital fossil fuels stay in the ground if the world is to have a realistic chance of curbing climate change, and there is much hand-wringing in the west about perceived hypocrisy in persuading developing countries from exploiting their own resources and powering their growing economies.

Norway is better placed than most to take a moral responsibility in ending its interest in gas, and leading by example, but Helguson prefers to look at the question from a market perspective.

“I think we know globally that a lot of these fossil sources will remain in the ground. Whether they remain in the ground depends on how demand develops as well as cost of exploration and availability of oil and gas resources. A lot of that has to be left to the market but the market will operate within steadily stricter climate policies.”

Speaking of developing countries Norway is proactive in developing renewables in those nations, where the power sources have been neglected until recent years.

“We have a number of initiatives within our aid programme. We have some companies, partly public companies that are active in the field of hydropower development and we are in the process of setting up a new fund which has a working title of Green Fund. It will be making investments in green technologies including renewable development in developing countries – it’s a fund that will be able to invest both in Norway and abroad and will have an investment portfolio fund base of 20bn NKR.”

In this, a week when the anniversary of COP21 is celebrated, and its mission tenets enter into law, the drive towards a new energy future seems unstoppable, but the necessity of conventional power remains true for now.

Carbon capture and storage looked to be on life support early this year after severe setbacks in terms of investment commitment. But it’s not going away so long as the storage issue continues to go unresolved. Seen by its detractors as a rogue technology likely to encourage more fossil-based power, those who see themselves as pragmatists think differently, Norway among them.

“In our budget for next year we have just announced that we will take it to the next step in development. It’s still uncertain and what is very clear is that there are not enough efforts at global scale to really see this take off as a technology. But we hope that if our process is successful that it could trigger further investment in it.”

“But the pace of renewable development puts it in a different light and the oil price is also currently not helpful for these investments.”